Stories from the The Dory Shop

A Busy Boatyard as 2015 Draws to a Close

Lunenburg has the reputation of being a quiet, slow-moving fishing town. A UNESCO World Heritage Site where, once upon a time, the harbour was busy with fishing schooners and plenty of boat builders were being kept busy doing what they do best: building wooden boats and ships of all shapes and sizes. These last few months here at the Dory Shop I believe we’ve had a taste of what it might have been like. Busy? We’ve been run off our feet!

The PICTON CASTLE was in Lunenburg for much of the summer, and the Dory Shop was given the opportunity to work with the crew to do some work for the ship before she departed on her Transatlantic Voyage in October, including building some new spars and maintenance to a few of the ship’s small boats she carries on board. 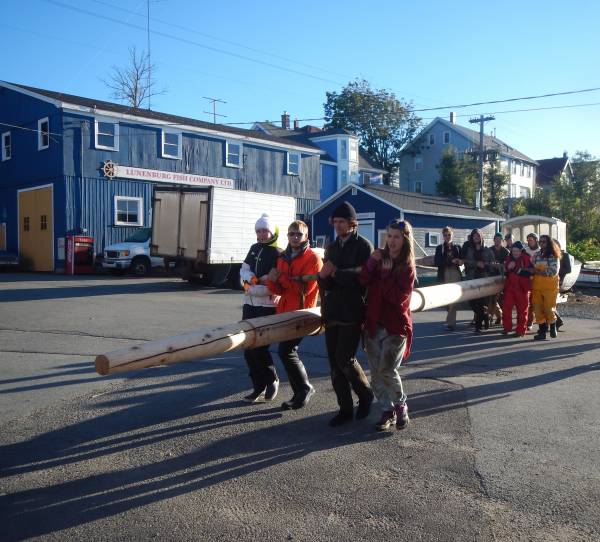 Two weeks before the beautiful square rigged barque sailed out of Lunenburg Harbour with Captain Sam Sikkema at her helm, the Dory Shop started the first of two back-to-back dory building courses. On the menu was a Black Rocks dory – 11’ bottom and 14’8” overall. We were lucky enough to have a dedicated photographer taking part in that course, and we have been blessed with some of the best dory building photos I’ve seen! If you are interested in a photographic overview of the building of a dory, take a look at our Facebook page where there is an album of photos (http://on.fb.me/1SwDad4). Captain Sam fell in love with that dory and she now lives with him aboard the PICTON CASTLE. 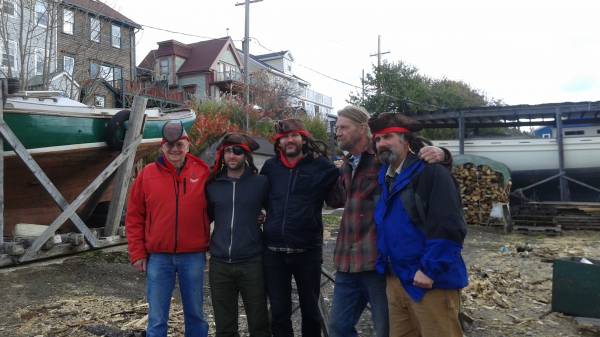 With only one short weekend to recover, Jay was at it again the following Monday morning with a new group of five very keen men coming to us to build a dory. Five men work a lot faster than four and they were done a bit early, so it gave us an opportunity to go and visit Michele Stevens at her sail loft on Second Peninsula where we were able to see some sails being made for a twin of the beautiful American schooner COLUMBIA. After that Angela Saunders opened up the Fisheries Museum to us for a private tour. If you haven’t yet been to the Fisheries Museum I’d highly recommend it: it’s a super interesting museum where even a non-museum-goer will find interesting bits and pieces to easily occupy an hour or two (or three!) of their day. A second successful dory launch had one of the students pour a bottle of bubbly over her and christen her his very own. This second dory, also a Black Rocks, has now gone to live in Newfoundland with Ken, one of the five men who built her.

While all of this was going on, we had another few projects going on in the background to keep Jay and Bub out of trouble when they had ‘free time’ (believe me: there was no free time. These guys never stopped!). Gary “Bub” Dares did some upgrading work to the Dory Shop herself. We now have a woodshed right outside the door, and the area where the scrap wood used to go is now all tidied up and secured for our planer which will move in there as soon as we get some electrical work done. This not only looks nice and tidy, but it will also save Jay and Bub a lot of time when building dories. Until now they would pick a plank and walk from the shop to the warehouse next-door by PICTON CASTLE’s wharf. While the PICTON CASTLE was in port this summer it meant not only walking the wood over, but also unlocking the security gate and signing in and out of the secured area. What a time consuming lot of bother! Now the planer will be right outside the door, easily accessed by Bub and Jay whenever they need it and without the hassle of entering and exiting secured areas when PICTON CASTLE comes home.

Not to leave Jay with time on his hands, he was putting the finishing touches on a dory which was headed for Hong Kong. Yes, you read that correctly: a gentleman from a school in Hong Kong wrote to me with photos of a wooden row boat which completely burst at the seams during a black storm two years ago. The school has a schooner and needed a wooden boat on board for students to row and occasionally sit/sleep in. He fell in love with our dories and was absolutely adamant that a Lunenburg dory was what they wanted. I explained that the cost of shipping would be more than the dory, and even offered to copy plans from The Dory Book which he could take to a builder close by, but it was one of our dories he wanted and his mind would not be changed. The dory wasn’t painted the traditional Dory Buff and Green – he wanted something special, and she sure looked pretty when she was finished. 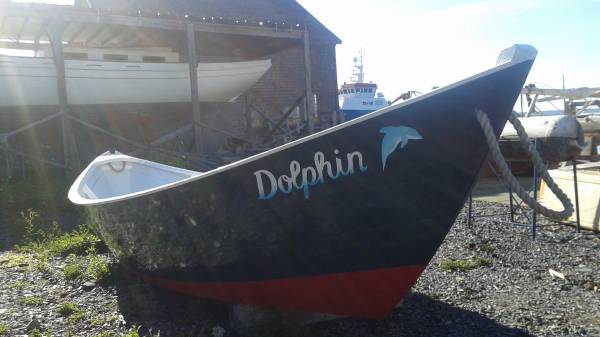 With the help of two forklifts, we managed to load the crate that contained the dory onto a truck headed to Montreal. She will be transported by truck and train across Canada and eventually leave on a ship out of British Columbia, with an early January delivery date in Hong Kong. Imagine that: a Lunenburg dory in Hong Kong. Wouldn’t Lawrence Allen and Freeman Rhuland be amazed!!!! 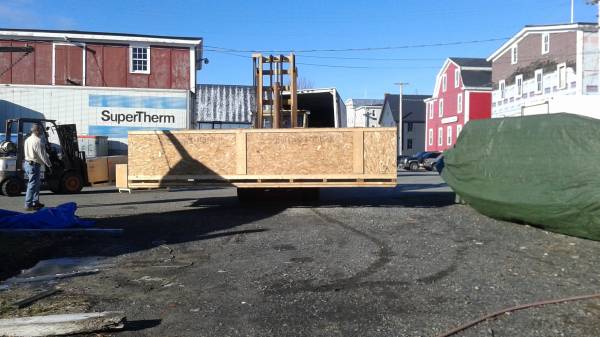 Next on the list was Lunenburg’s Santa Claus parade and the Dory Shop and PICTON CASTLE put together a float and a whole whack of us ran along behind the float handing out candy canes and chocolates. They shook things up a bit this year and the parade took a different route (and much faster one – when I said ‘run’ I meant it quite literally – who says things don’t change in Lunenburg)! 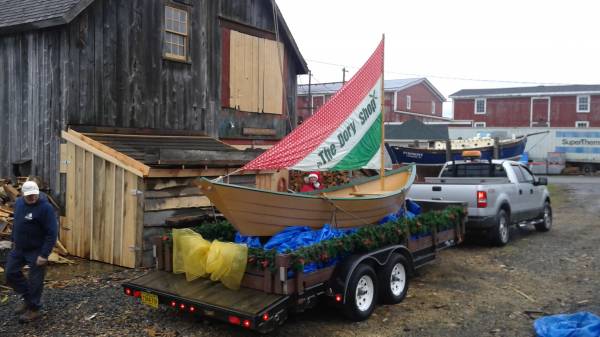 And finally to the project we are currently working on: Jay, with Bub’s help, is building a Scandinavian faering boat for an American movie. This is a very exciting project, and even though we’re in the early stages the boat is looking lovely. Not flat bottomed, like we’re used to around here. We’ll have more photos as she comes together, and once the movie has been released we’ll be able to tell you more about it. Until then, it’s all pretty hush-hush – although if you’re here in town and you’d like to pop in and take a look, you’re more than welcome. 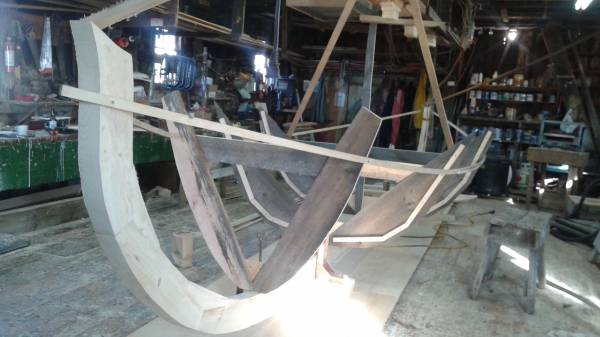 There are some interesting possibilities in the near future as well – including repair work to an historic schooner and a dory to be used as a chair on a luxury cruise ship. We’re always looking for new and unique projects to sink our teeth and tools into and this seems to be the year for it!

As this busy year rolls to an end I’d like to thank you all for your continued interest in the Dory Shop. I feel like I am incredibly lucky to be here – being a part of something so historic and beautiful is something not everyone gets to do in their life, and here I see it every day. I’ll never stop being amazed with Jay’s ability to take a stack of greying wooden planks from the yard and turn them into a beautiful wooden boat. Perhaps if I had the expertise to build one myself I might not find it quite so fascinating – but for now I continue to think of it as something rather magical.

Here’s to hoping we all have a fun-filled holiday season and a happy, healthy and interesting 2016!  Join me in the New Year and read more of the stories, projects and general goings on at Lunenburg’s historic Dory Shop. 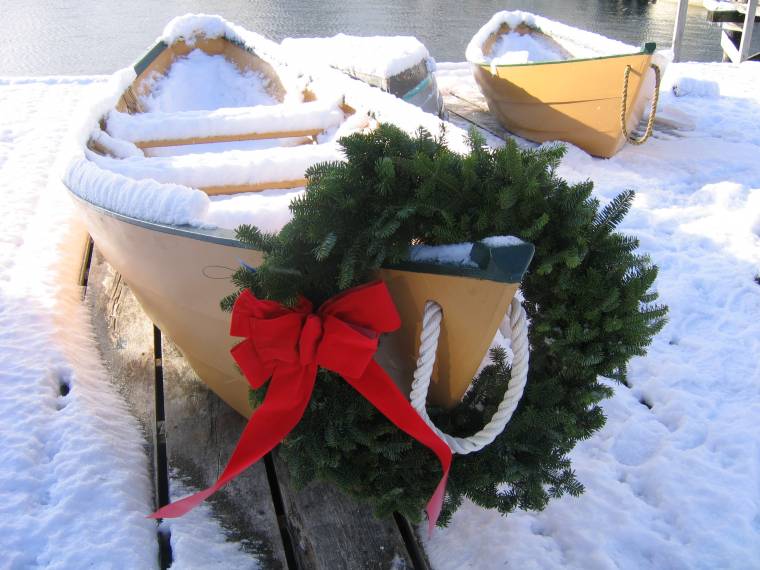