Stories from the The Dory Shop 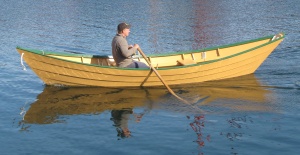 An article in this month’s issue of Classic Boat, entitled 10 Iconic American Boats, lists both dories and working schooners.

Of dories, the authors say:

“Rowing craft have been around for thousands of years, but the Gloucester Dory, still seen stacked inside themselves on docks [or schooner decks] around Massachusetts, started their own genre in America. Their seaworthiness, simplicity of build, and pleasantly upturned sheer are the image of Yankee ingenuity, thift and enjoyment.”

Although we’d ideally edit the article a bit to North Americanize it’s depiction of Banks dories (they get called Gloucester and Lunenburg dories because these were two of the largest ports in the Saltbanks fishery, but they actually appear to have originated in Amesbury), we agree wholeheartedly with the citation.

Hooray for the iconic Banks dory!